Give in to your cravings and enjoy this updated keto cinnamon rolls recipe with maple bacon icing. It might be low-carb but it tastes like the real thing! 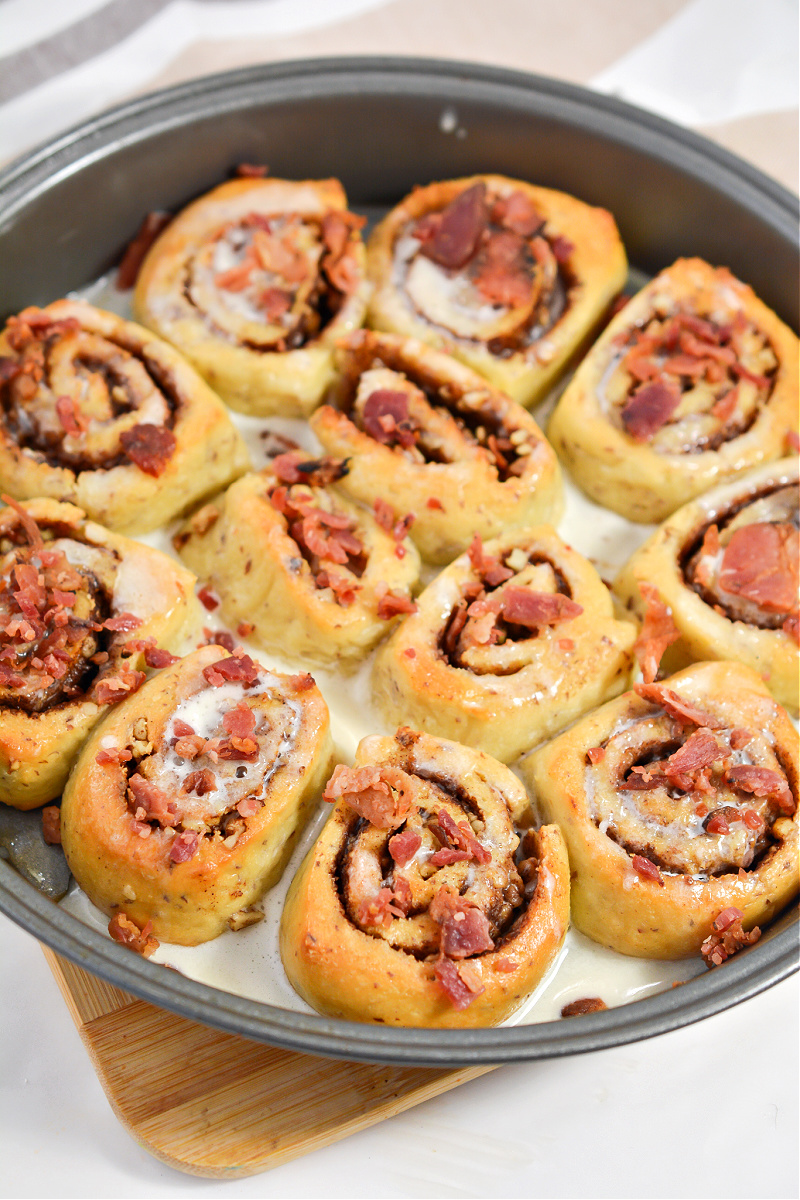 Very few things go together quite as well as cinnamon rolls and something savory! That is why I added bacon crumbles to the icing. You won’t believe how amazing this little change is. 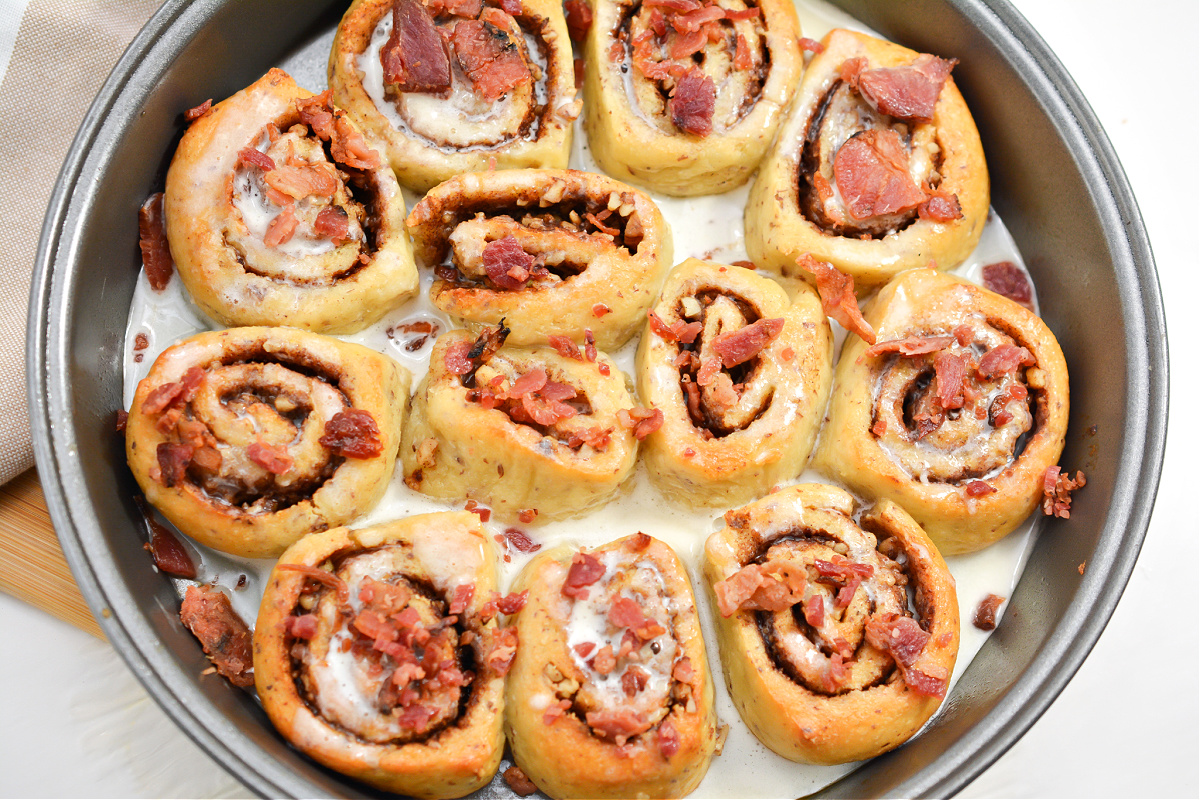 When I decided to stick to the keto diet there were a few foods that I knew I’d miss. Cinnamon rolls were one of those foods. They are one of my favorite pastries! That’s why I worked so hard at making a keto-friendly version of them and I’m so happy to share my recipe with you too. 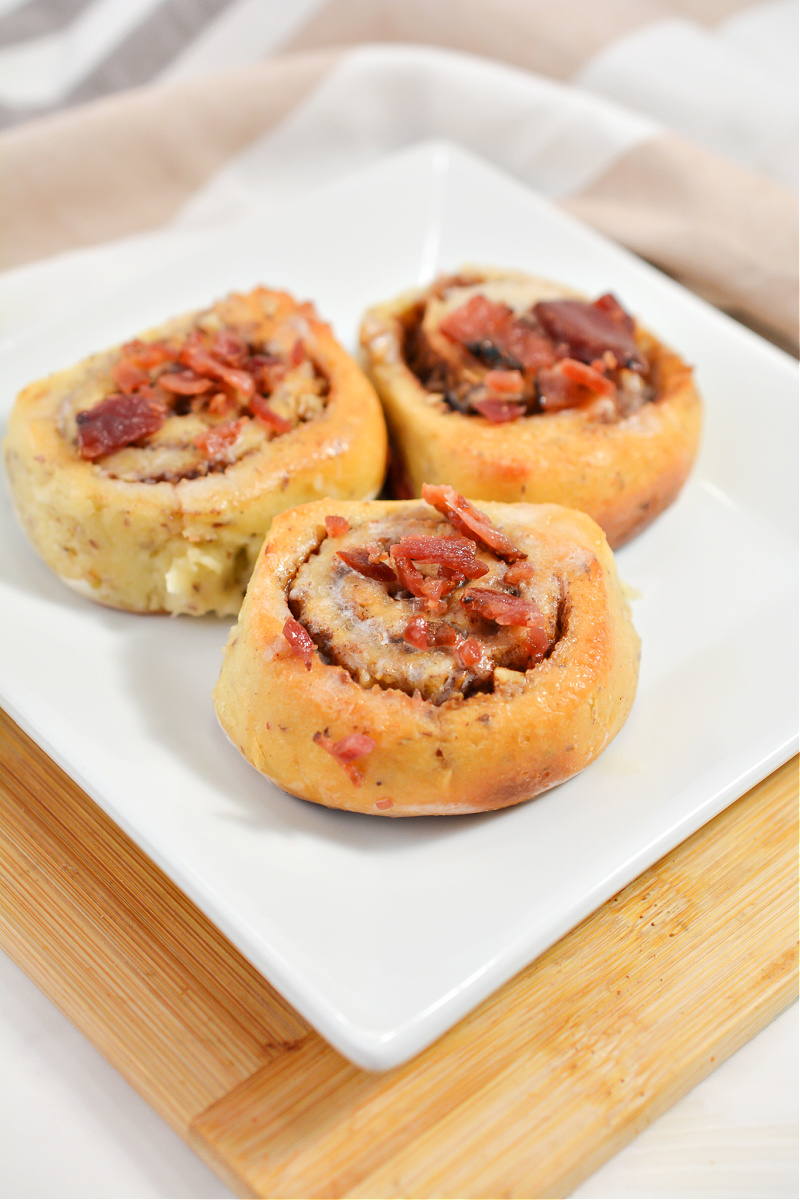 If you make these ahead of time, you’ll have a delicious breakfast treat ready to eat first thing in the morning. Make a big batch of them, your entire family is going to want to eat them too. 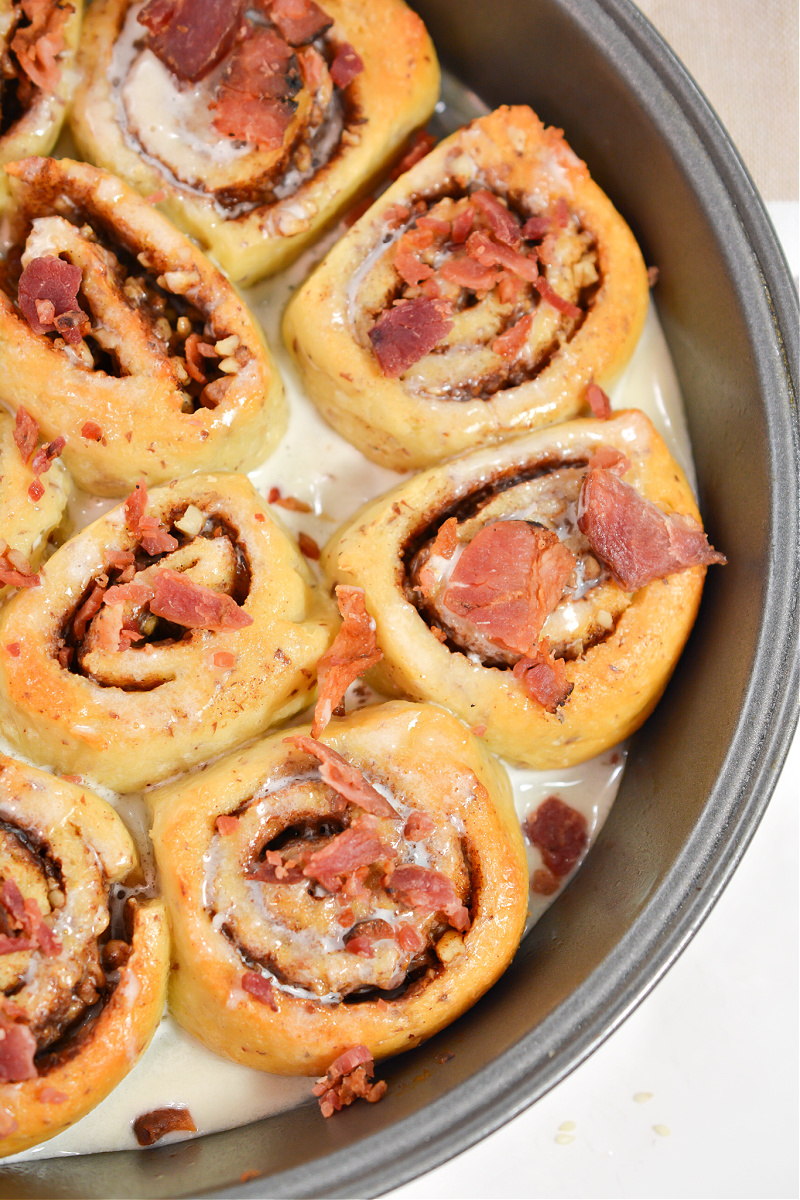 One of my favorite things about this recipe is that there are only 3g net carbs in each cinnamon roll! That means you can have an entire cinnamon roll guilt-free.

One more reason to save this recipe is the sugar-free maple bacon icing. You can use this on so many other treats. Use it on keto cupcakes or your favorite low-carb mug cake. It tastes bakery-ready! 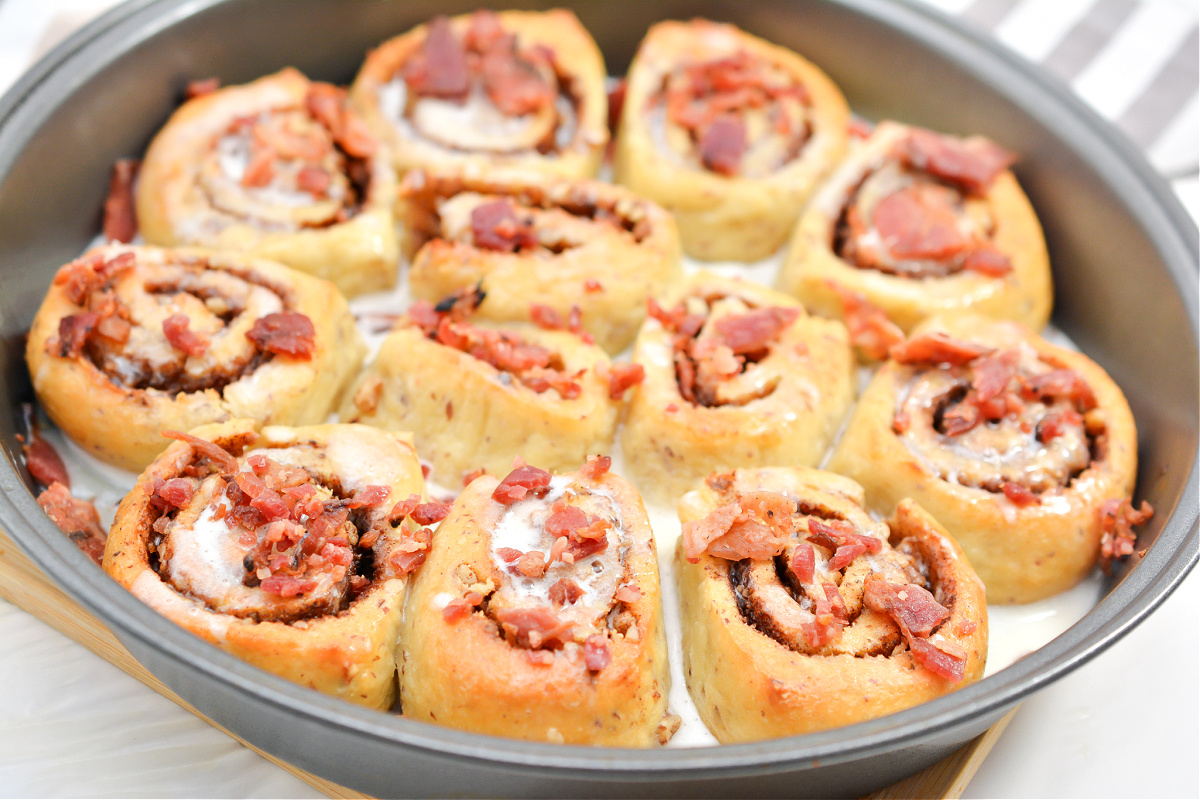 Some keto pastries use just almond flour and coconut flour for the breading. I wanted something a little different so I made a mixture of mozzarella and cream cheese with some almond flour. You have to try it, it turns out so good!

How To Make Sugar-Free Cinnamon Rolls

The good news about these cinnamon rolls is that you don’t have to let them rise. Since they don’t have yeast, all you have to do is make the rolls, fill them, roll them up, and bake them. 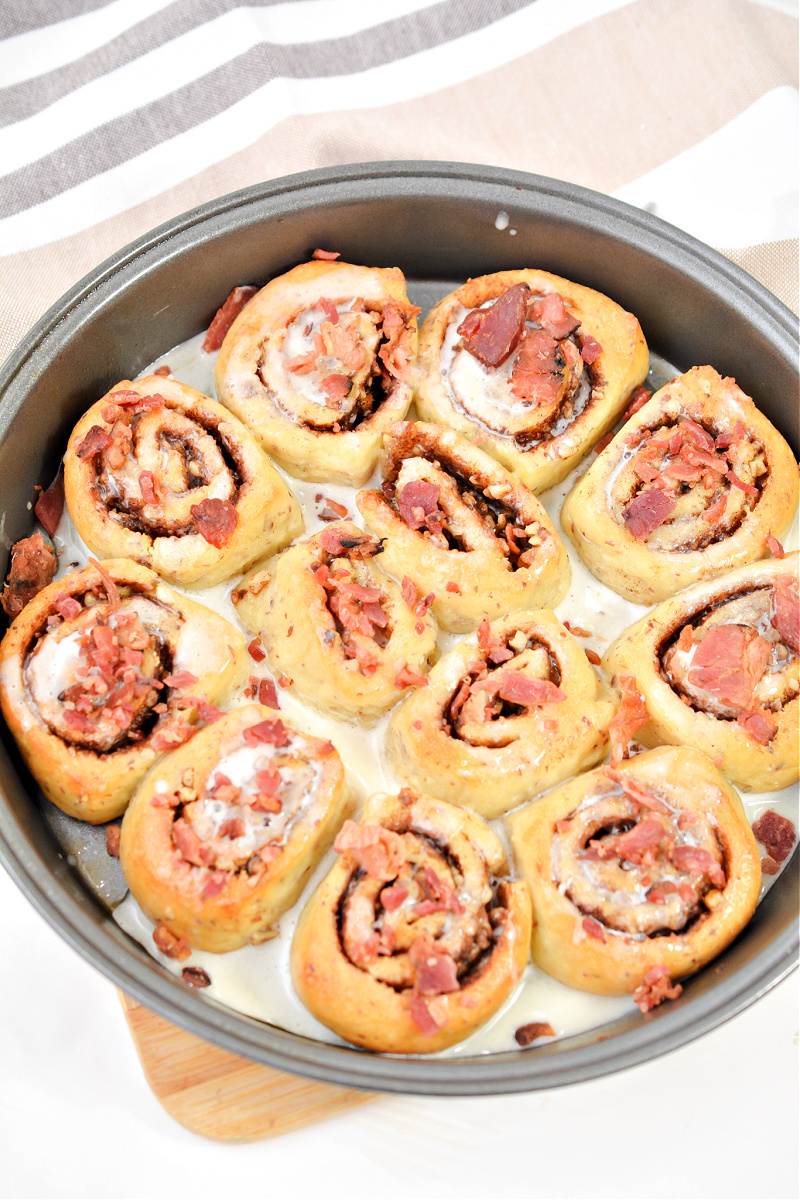 There are three parts to this recipe – the rolls, the filling, and the sugar-free icing.

Here’s what I used in each of the different sections and any substitutions you can make.

For the main cinnamon rolls, here are the ingredients you will need:

Save this recipe, you can use this sugar-free icing on other treats too.

I updated the recipe and only used 3 simple ingredients in the filling. All I used was some chopped walnuts, swerve brown sugar substitute and cinnamon. 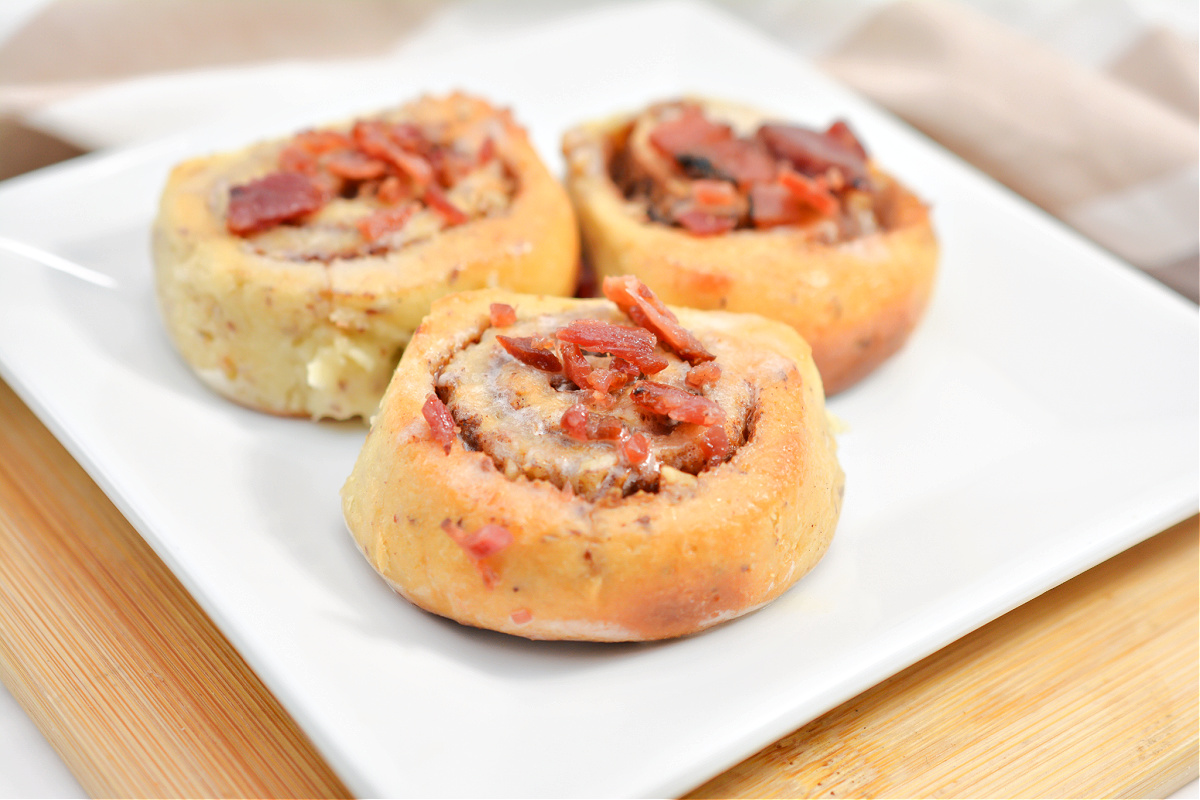 You can leave out the walnuts or replace them with pecans. I think the walnut filling gives it a nice crunch, so try to make it with the walnuts before you leave it out.

The icing only has 3 simple ingredients as well – Swerve confectioner’s sugar substitute, heavy whipping cream, and maple extract. I also added some bacon crumbles because it really elevates the taste! 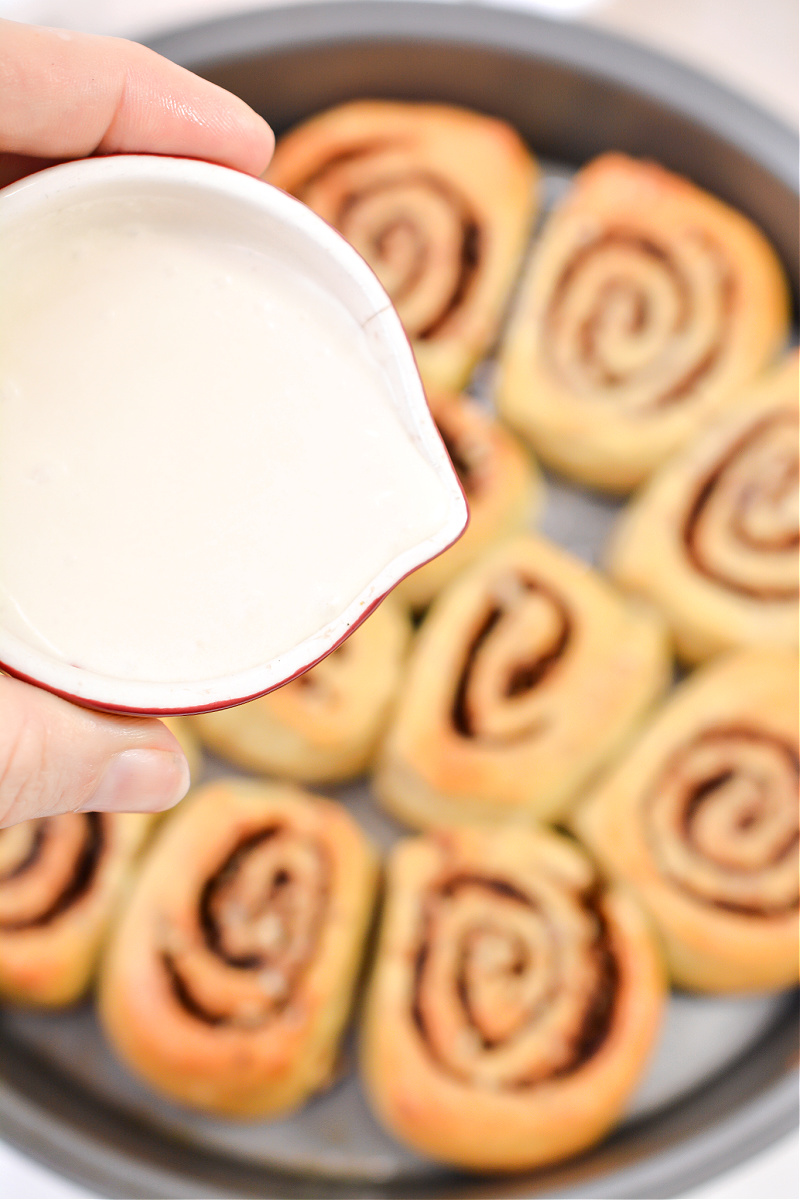 How To Freeze Keto Cinnamon Rolls

One of my favorite things about this recipe is that it can be made ahead of time. You can store it in the freezer and bake it when you need it. 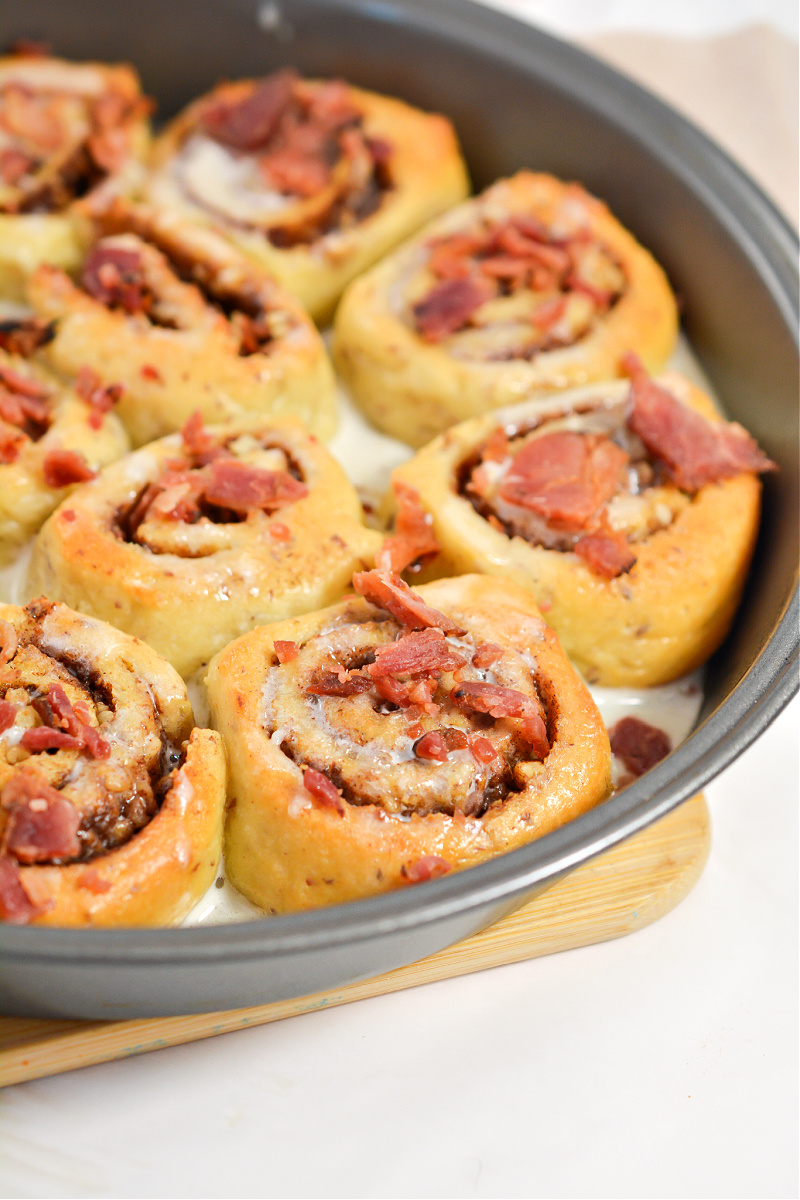 If you want to freeze it, first bake the cinnamon rolls and then let them cool completely. Then, store them in a freezer-safe container with a lid that seals completely.

When you are ready to reheat them, pull them out of the freezer and let them defrost in the refrigerator overnight.

Then, just put them in the oven at 375 degrees for about 30 minutes or until they are heated through.

Another fun addition to this keto cinnamon rolls recipe is peanut butter. Add a few tablespoons of sugar-free peanut butter (or sunbutter) to the filling. If you don’t want it in the filling, you can even add it to the icing. 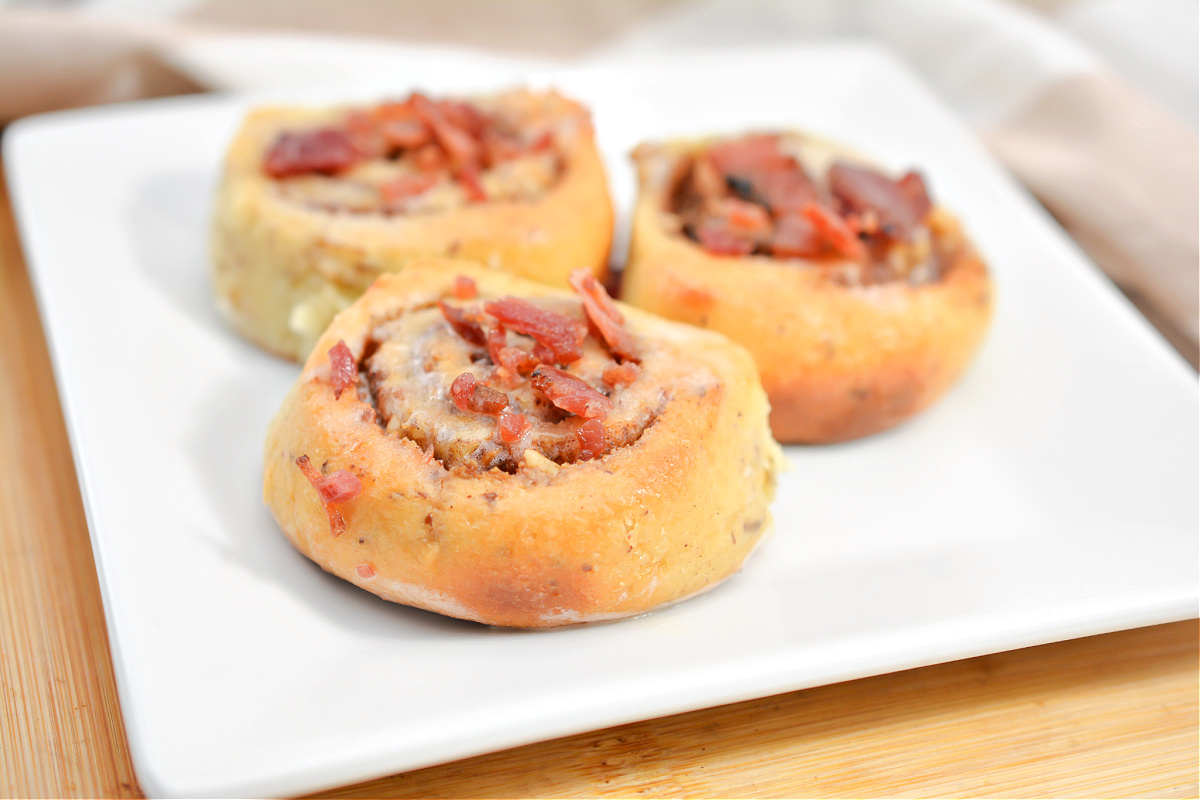 Either way, this will give you a little more protein and a fun new twist to a family favorite!

Here’s the list of ingredients to make this recipe. Exact measurements can be found below within the printable recipe card.

1. Preheat the oven to 350 degrees.
2. Add the mozzarella and cream cheeses to a microwave safe bowl and heat at 30 second intervals until the cheeses have melted and are combined into a sort of dough.
3. Place the cheese dough in a mixing bowl with the almond flour, egg, baking powder, flaxseed meal and vanilla extract. Beat until well combined.
4. Put the dough in between two pieces of parchment paper and roll it out into a rectangular shape about ¼ of an inch thick.
5. In a bowl, combine the ingredients for the filling. 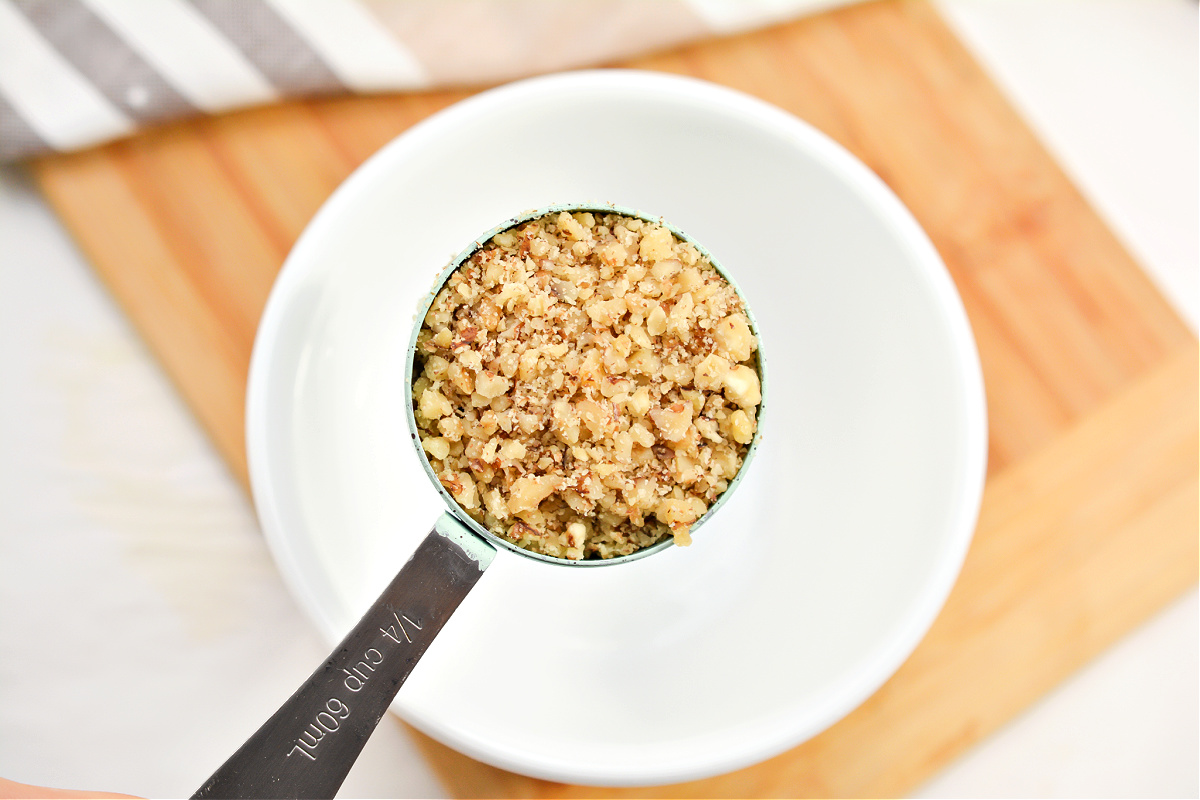 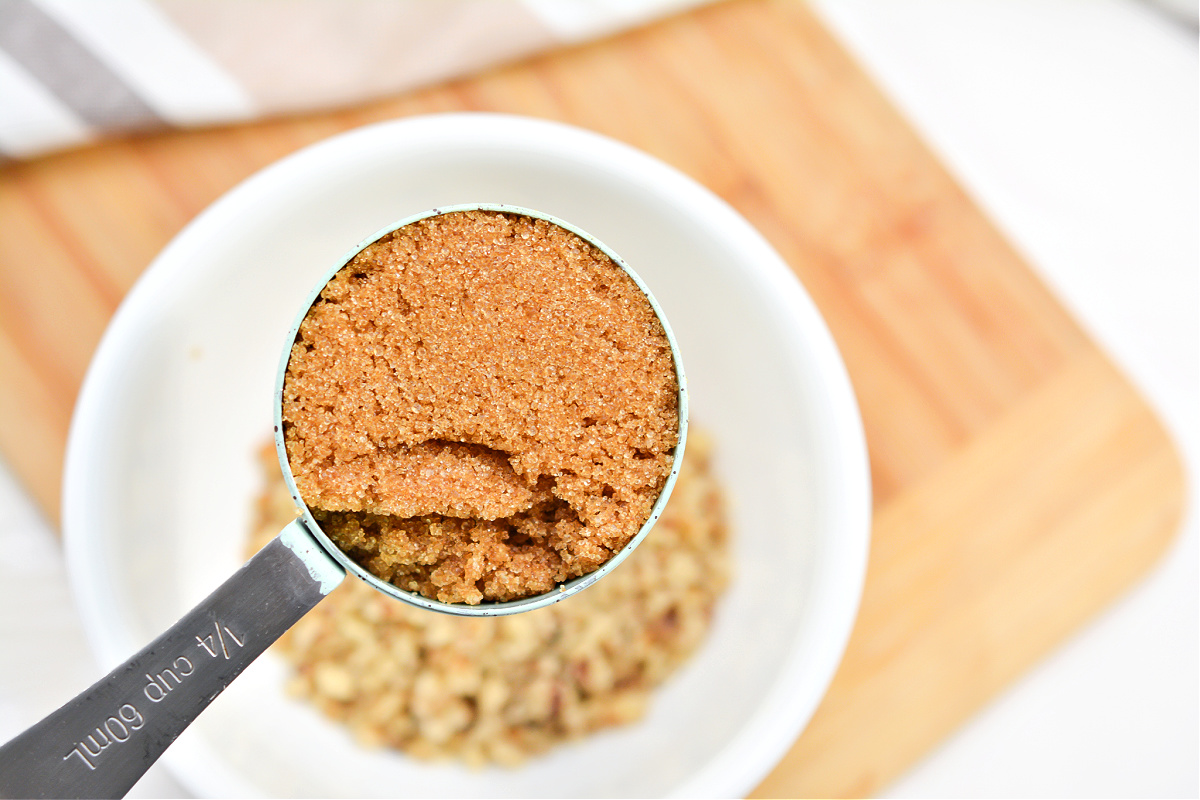 6. Layer the filling over the dough. 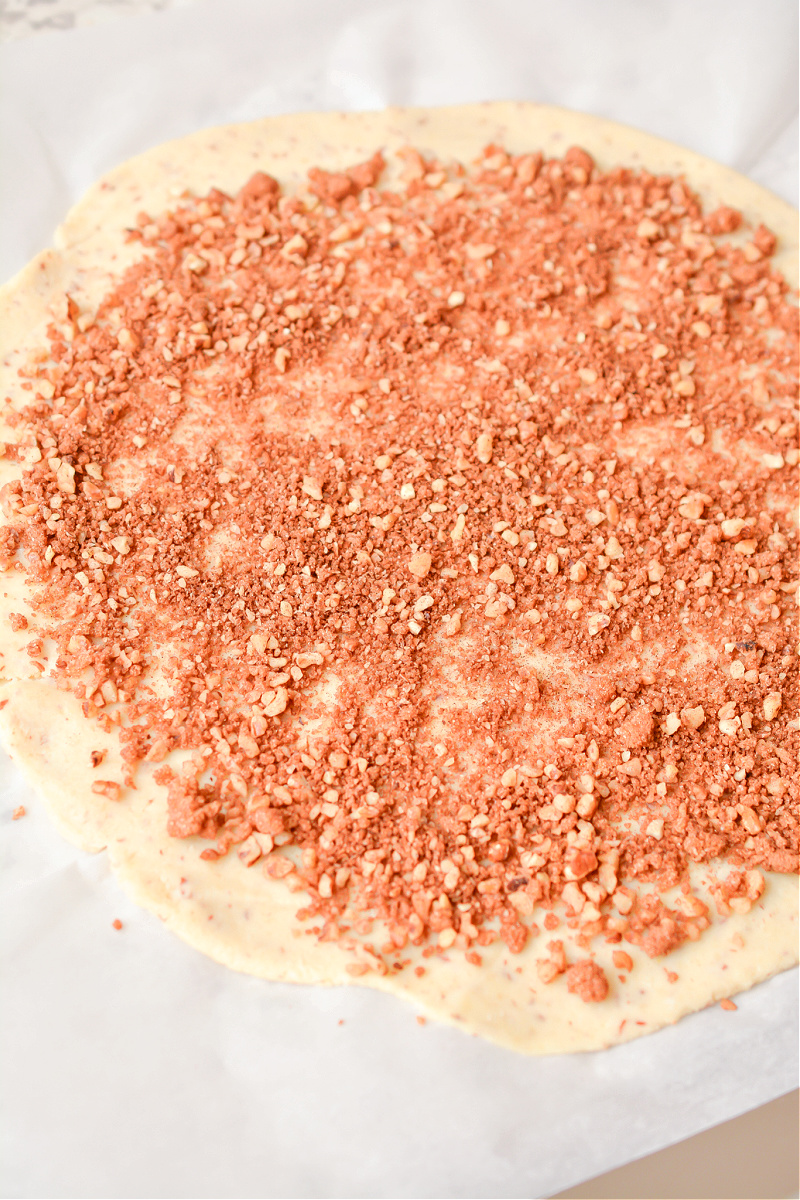 7. Roll the dough up into a log around the filling. 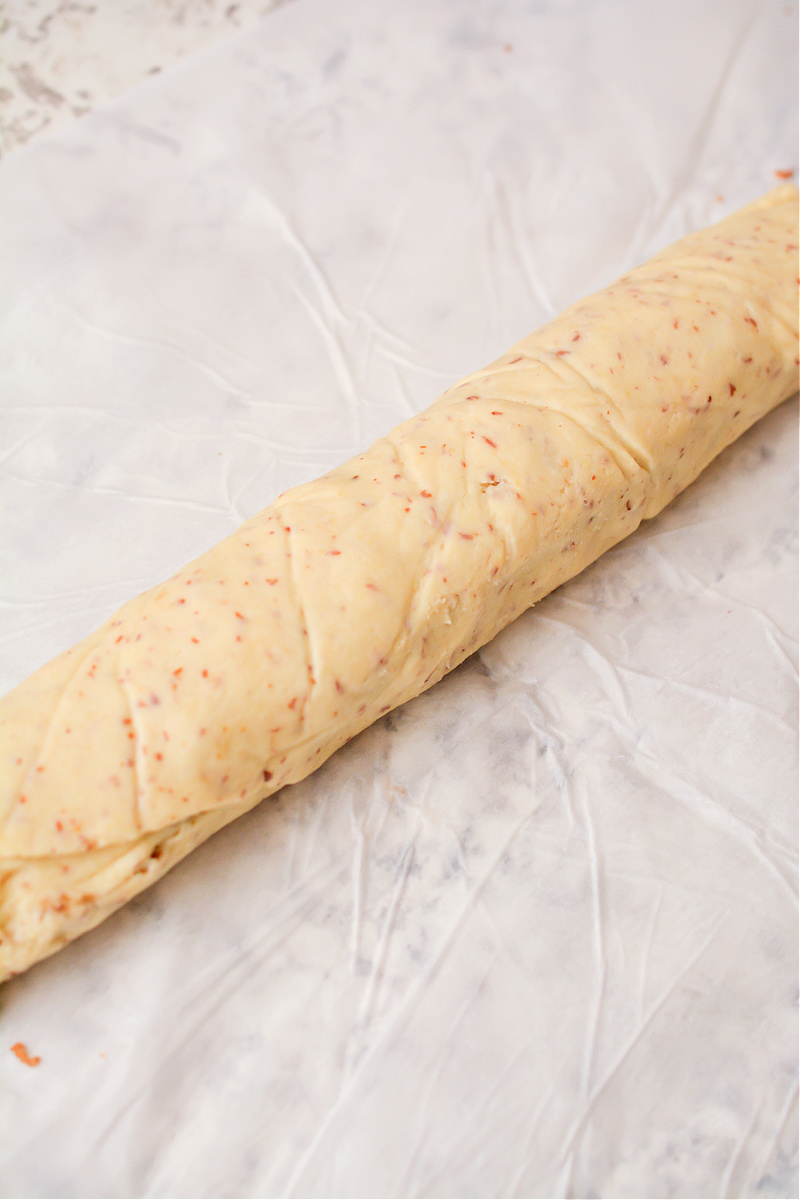 8. Slice the dough into 12 even sections. 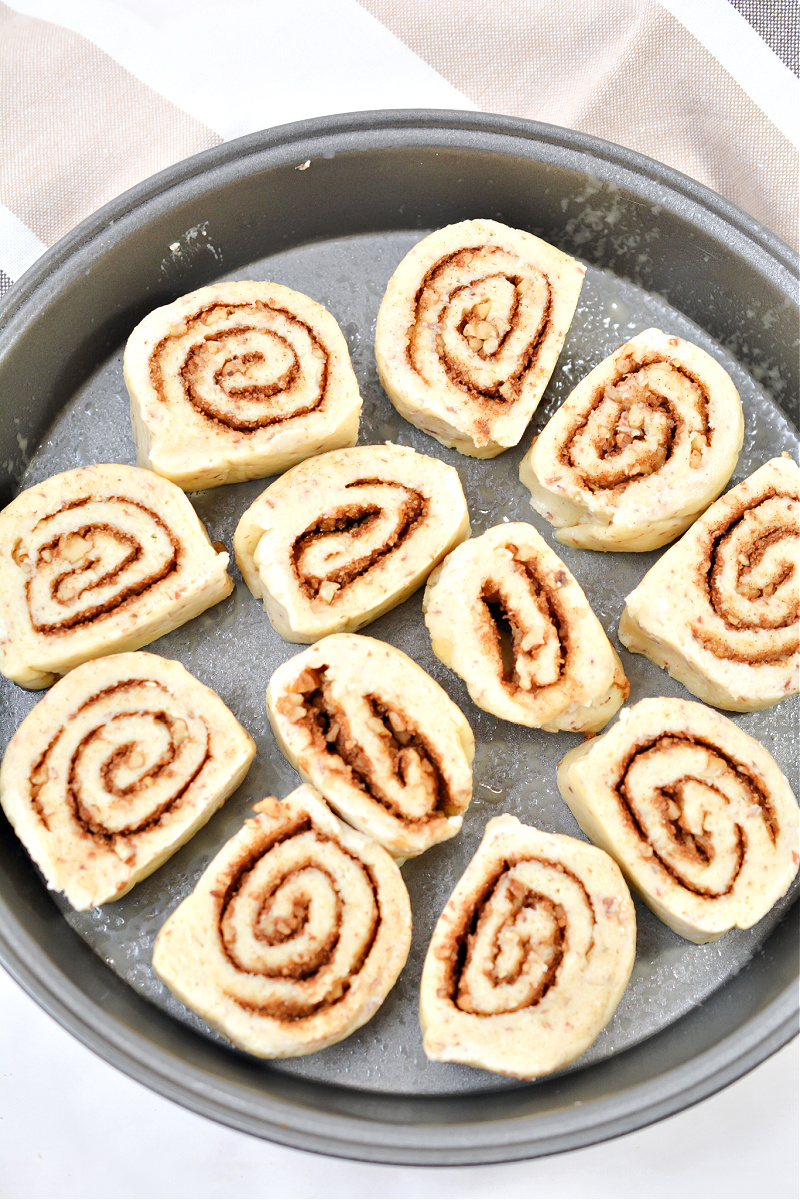 9. Place the sliced rolls into a well greased 9 inch cake pan and bake for 20-25 minutes until browned and cooked through. 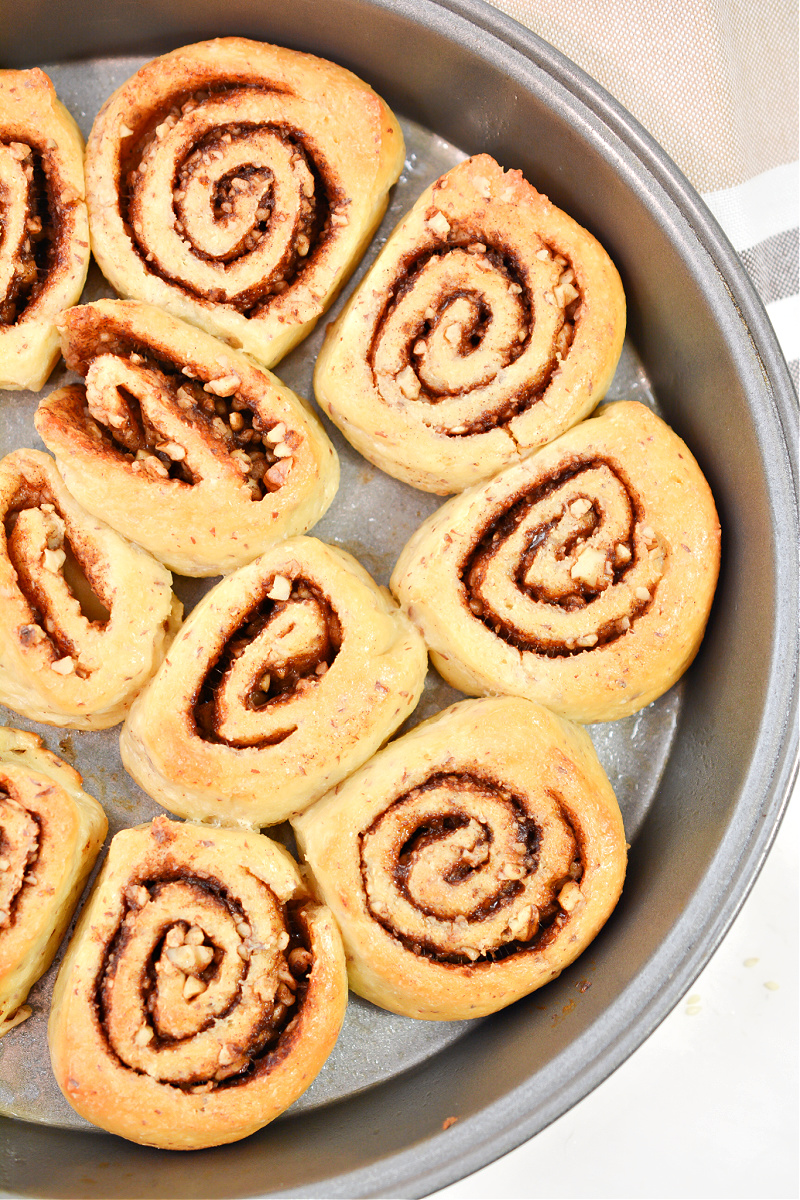 10. Mix together the ingredients for the icing except for the bacon, and drizzle over the warm cinnamon rolls. 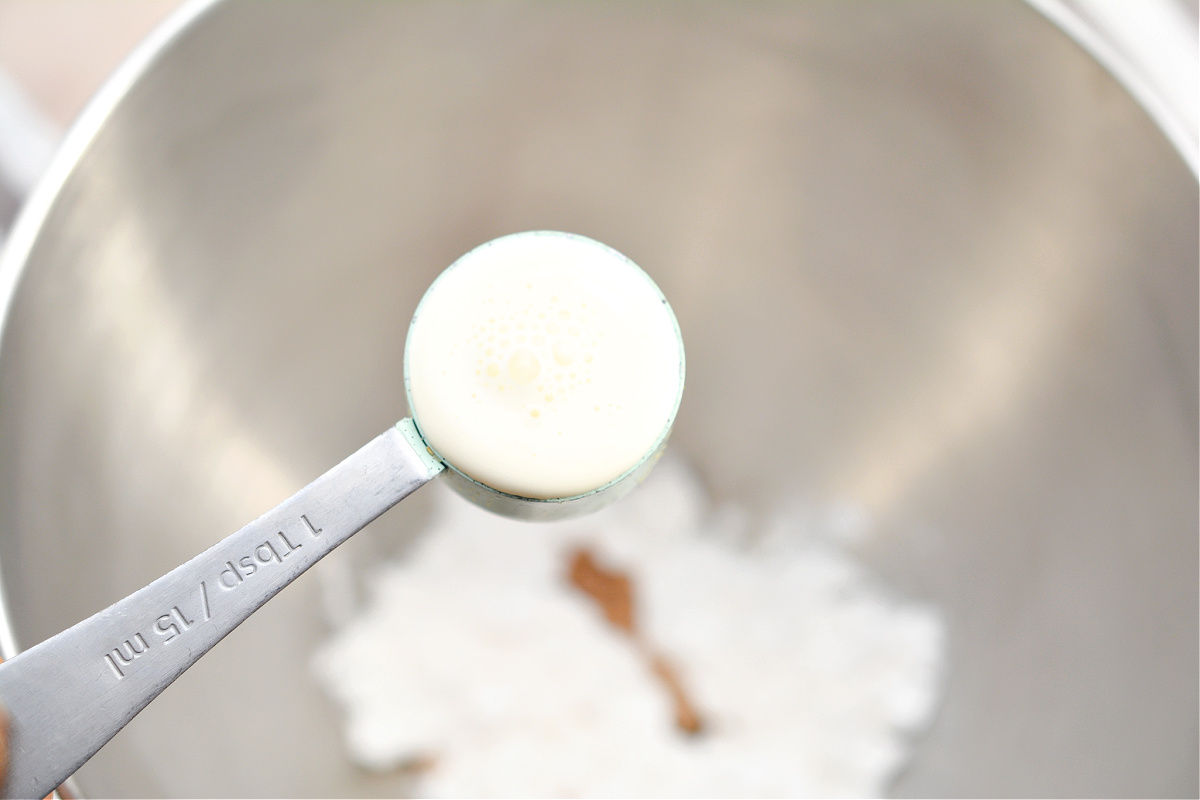 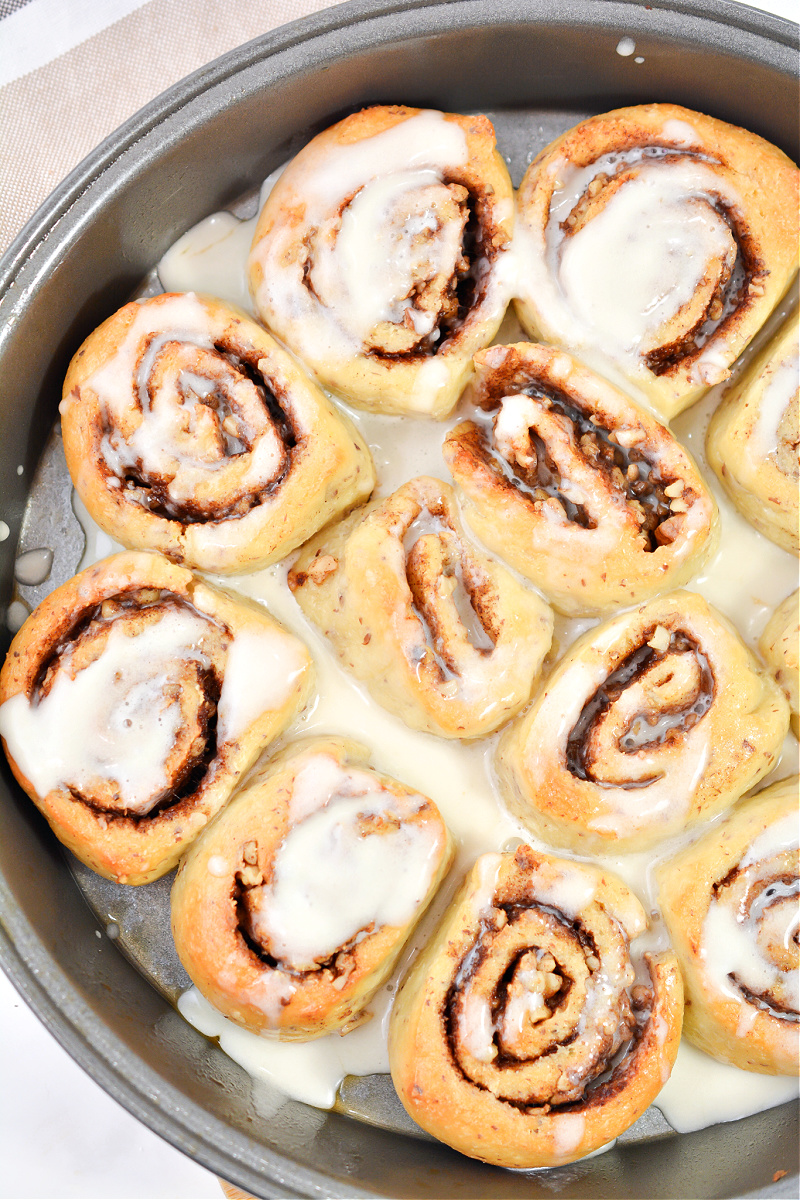 11. Sprinkle the crumbled bacon on top before serving. 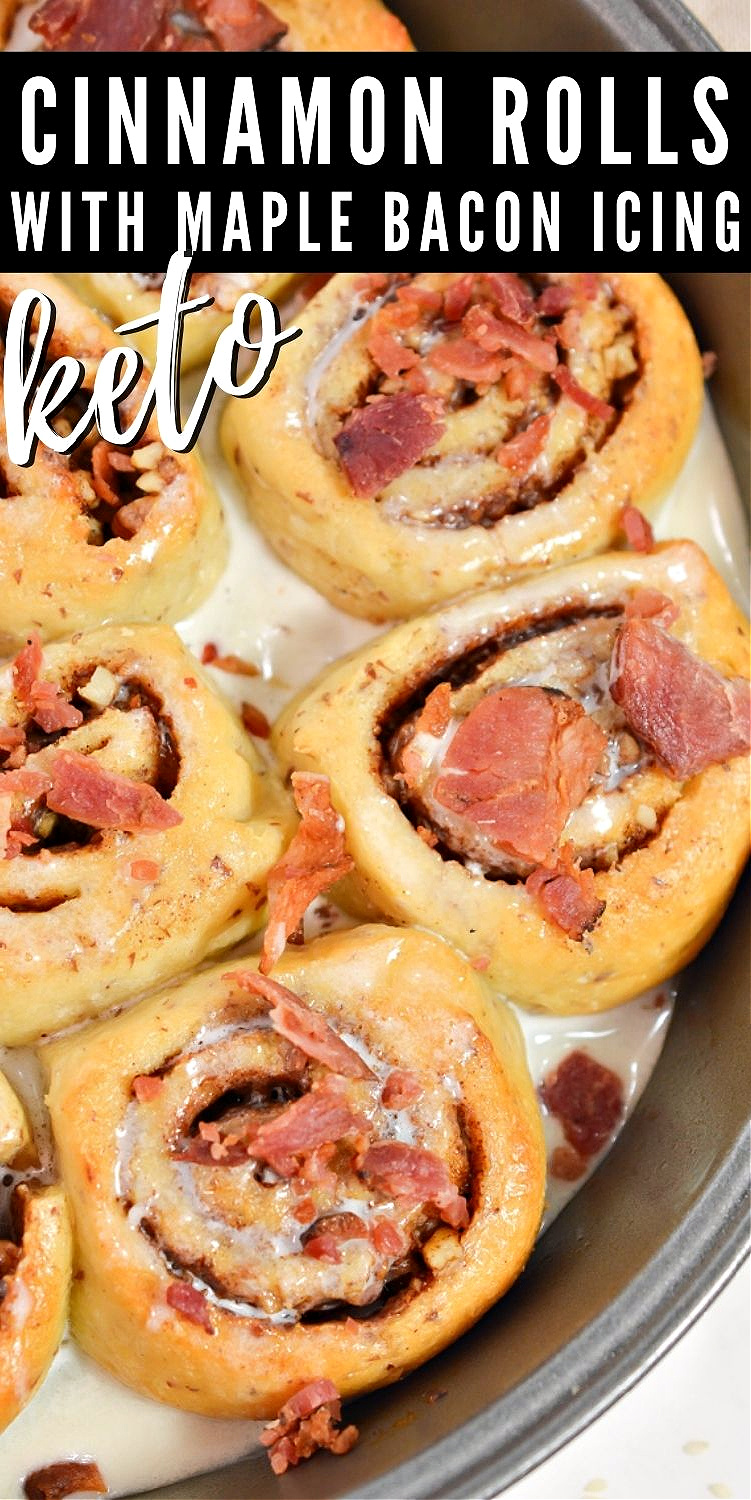 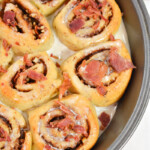 Give in to your cravings and enjoy this keto cinnamon rolls recipe. It might be low-carb but it tastes like the real thing! 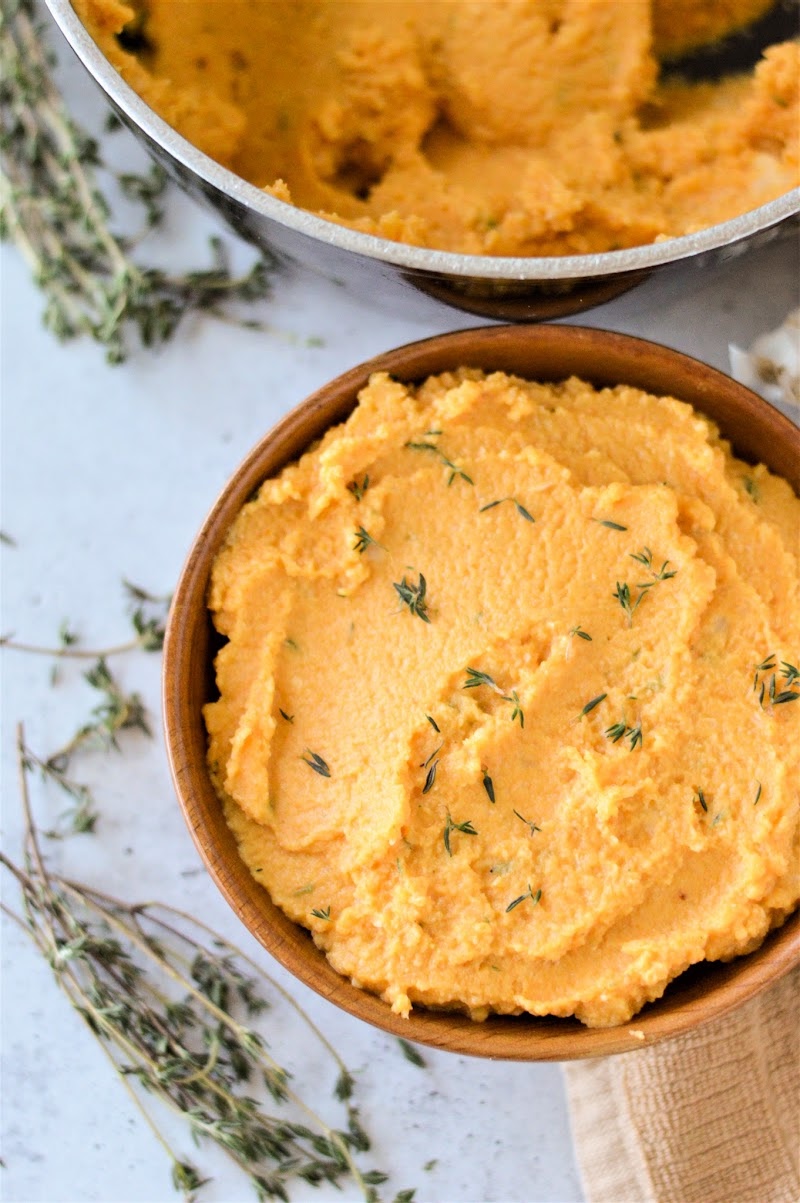 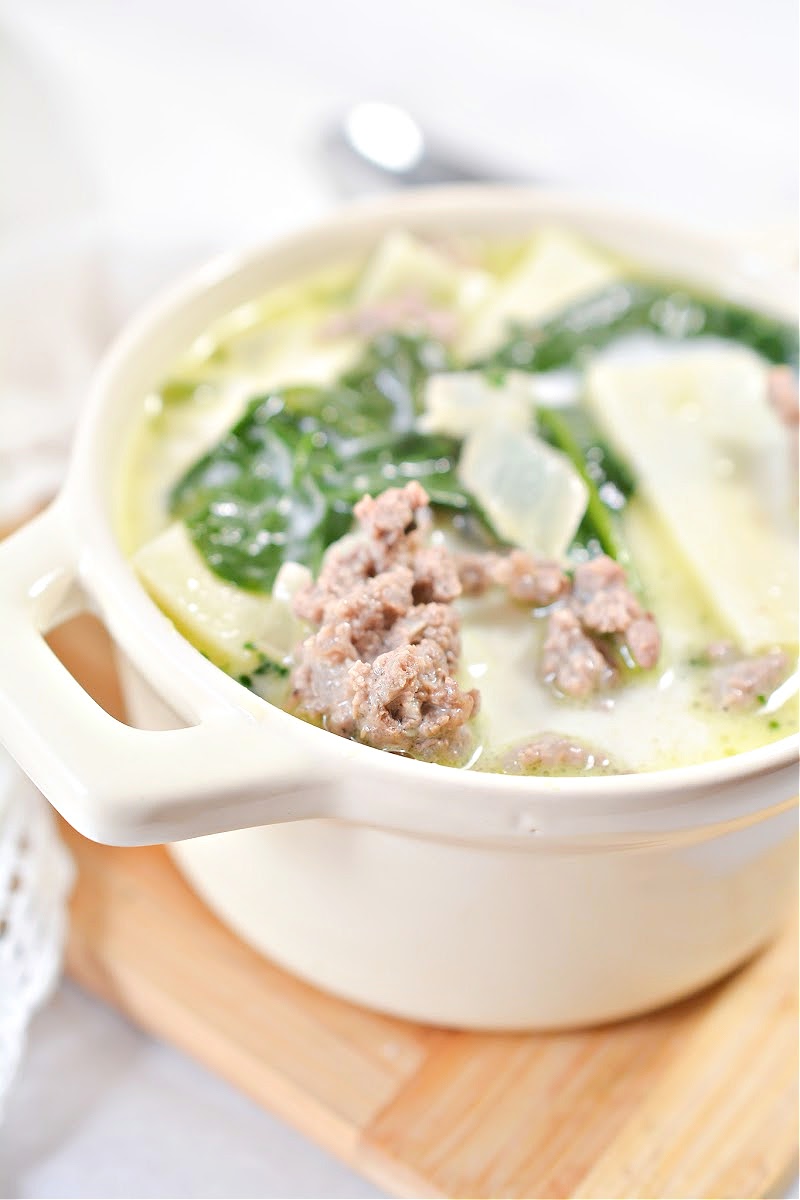